A One Woman Show with Courtney Walsh 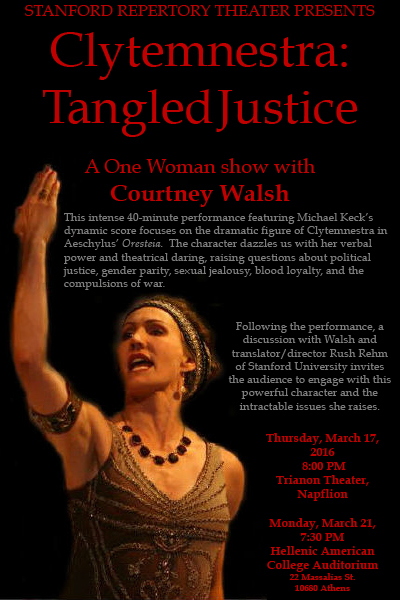 Clytemnestra: Tangled Justice is an intense, 40-minute one woman show with Courtney Walsh. It features Michael Keck’s dynamic score as it focuses on the dramatic figure of Clytemnestra in Aeschylus’ Oresteia. The character dazzles us with her verbal power and theatrical daring, raising questions about political justice, gender parity, sexual jealousy, blood loyalty, and the compulsions of war.

Following the performances (Napflion, on March 17, 8:00pm, at the Trianon Theater; Athens, on March 21, 7:30pm, at the Hellenic-American Union), a discussion with Walsh and translator/director Rush Rehm invites the audience to engage with this powerful character and the intractable issues she raises.