CALL FOR PAPERS: CLASSICAL RECEPTION AND THE HUMAN – International Conference at the University of Patras, 10-12 June 2016 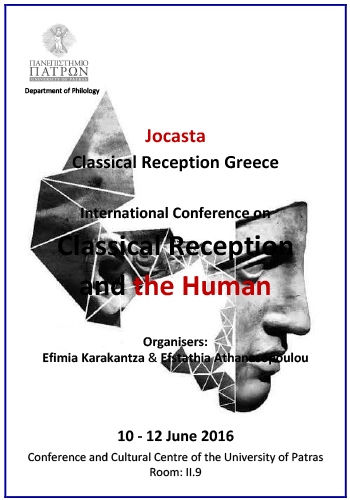 In the very first line of the choric stasimon from Sophocles’ Antigone we read the susceptible to differentiated translational reception choices phrase «πολλὰ τὰ δεινὰ κοὐδὲν ἀνθρώπου δεινότερον πέλει». With the advent of digital technologies and the recent developments in biomedical and neurological science, the notion of the human becomes highly contested. At the same time, the continuous growth of racist, sexist, terrorist, economic, cultural, and other discriminatory practices forges our forgetting of the human. With B. Knox’s comment at the 1980 American Philological Association that “classical texts are the humanities” in mind, this international conference seeks to address the issue of how classical reception from early modernity onwards informs and re-shapes our conceptualization of the human.

We focus on the following research questions:

Please send an abstract of no more than 300 words on the aforementioned subject areas to classicalreception.human@gmail.com by October 15th 2015.

CALL FOR PAPERS: CLASSICAL RECEPTION AND THE HUMAN – International Conference at the University of Patras, 10-12 June 2016
+ Google Calendar+ iCal Export